Here are some quick facts about Alpacas, Suri Alpacas and their fibre 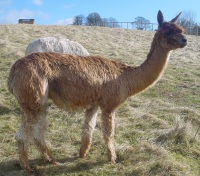 Alpacas were domesticated from the wild vicuna which still lives in South America (though endangered). They are related to Llamas and Guanaco and more distantly to Asian camels.

Suri is the rare breed version of alpaca

There are two breeds of alpaca: the suris make up less than 10% of alpacas. The other breed (pictured right) is called Huacaya, has a fluffy appearance (except when newly shorn!) and is the type that is more commonly seen.

In suris, the fleece hangs down flat against the side of the alpaca, usually organized into locks that resemble tight ringlets or dreadlocks. The fleece has a silky feel and reflects the light giving it lustre

Alpacas generally need to be kept in groups of 3 or more. They often form close friendships with other alpacas. Two alpacas can be kept if they have other herbivores (sheep or goats) as companions. Males and females must generally be kept separate. 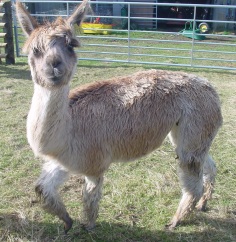 Alpacas make environmentally friendly lawn-mowers. They are inquisitive and quick learners. They will guard flocks of sheep or poultry from foxes. They can be easily halter trained and even learn to tackle agility classes! Castrated males generally make the best pets but non-breeding females can be great too.